Something I saw while badger watching

Occasionally I go to the forest as night is falling in the hope of seeing some badgers. One has to remain motionless and totally silent to evade detection. Darkness gradually fills the wood as the sun sets. As time passes one becomes more and more aware of the silence and the stillness, which is occasionally punctuated by sounds of rustling. Presumably the sounds of small wild creatures going about their business. Occasionally you might hear the hooting of owls or the barking of foxes, or other night sounds.

An experience I will never forget

Tonight I have a camera with me, mounted on a tripod. It is a mirrorless camera with a totally silent shutter, and for that I am going to be thankful, because I will have an experience tonight that I can never forget. If I didn’t have the photos as evidence I would probably wonder if it was all just a dream.

As it grows steadily darker I notice what looks like mist around the base of a tree. Not anywhere else, just surrounding that one tree. In fact the mist appears to be issuing from within the old hollow tree. I watch, quite mystified. What could it possibly mean? After watching for a while I decide it must be due to the temperature and moisture in the air.

My attention must have drifted because suddenly I realise there is a figure crouching in the hollow tree!

A mysterious figure appears as if from nowhere

I am stunned. From where did the figure arrive? How long has it been there? Surely I would have heard if anyone had walked over the dry leaves and twigs? Or are my eyes deceiving me? It is getting quite dark now, and I can’t be totally sure of what I am looking at. So I take another photo, knowing my camera will see more in the dark than I can. And when I look at the back of the camera I can’t believe my eyes!

I pinch myself. I really do literally pinch myself to see if I am dreaming. Am I awake, or have I dozed off?

Suddenly the figure starts to rise, but it rises slowly, I would say ‘cautiously’. I take more photos and when I examine what is on the back of the camera I am so frightened I hardly dare to breath. Will the sound of my own breathing give me away? Not only is my breathing deafening to my own ears, I can even hear the beat of my racing heart!

And then I remember the “Piper at the Gates of Dawn“. Could this be he?

But isn’t Pan a good god? Isn’t he a friend of the weak and helpless? Or is Pan just a friend to nature and the animals?

To this day I cannot say for certain if this was Pan I saw. But I can say the Beast or God or whatever had the appearance of a mix between man and demon. It had the horns of a ram, long and vicious looking canines like a carnivore, and a long red tongue such as I have never seen. The rear legs in particular seemed to have features that were both human and those of a hoofed animal (look at the ankle joint in some of the photos). 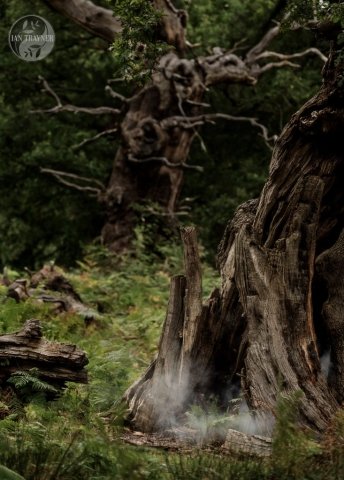 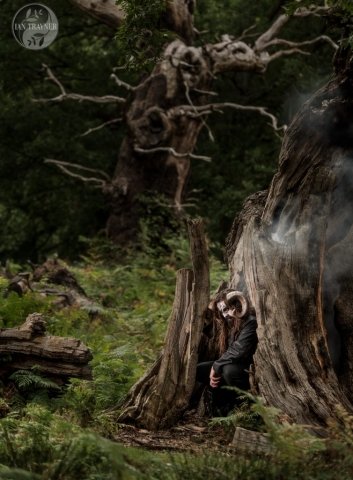 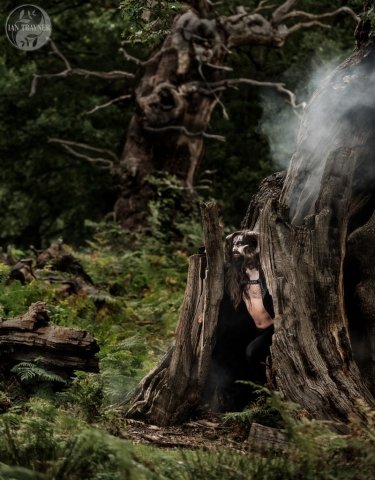 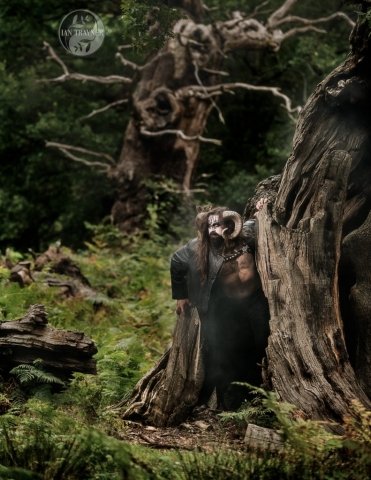 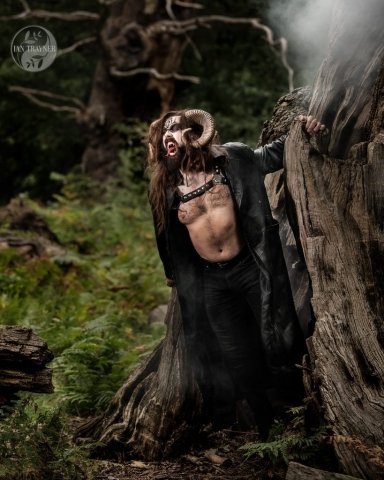 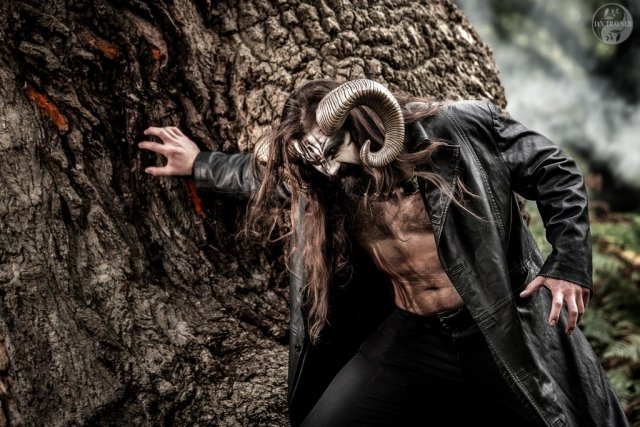 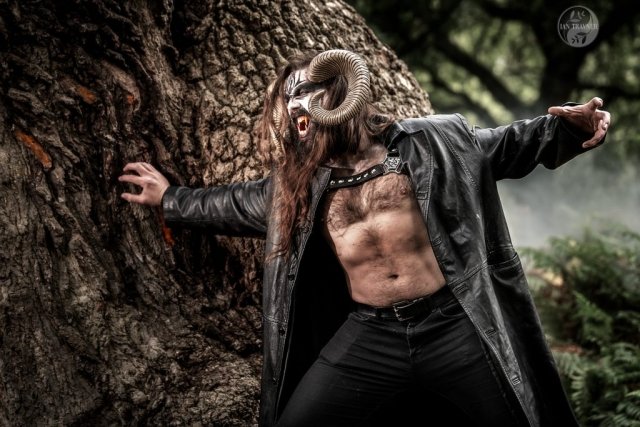 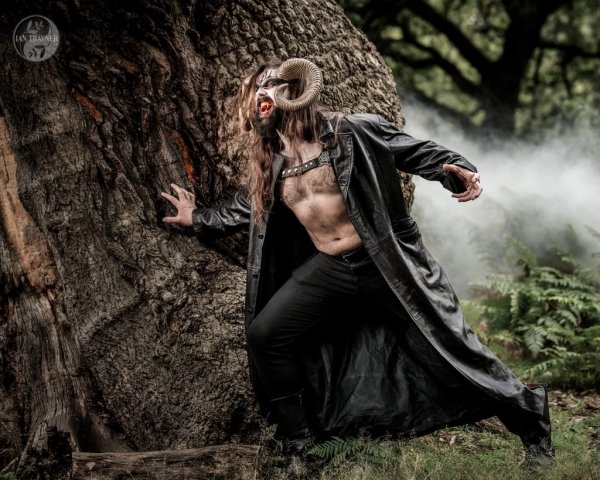 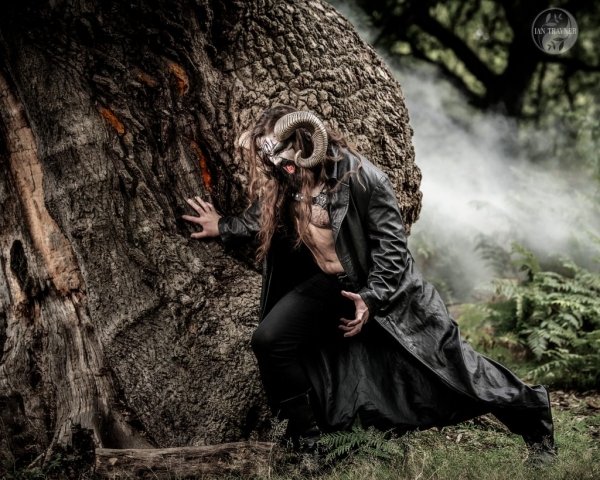 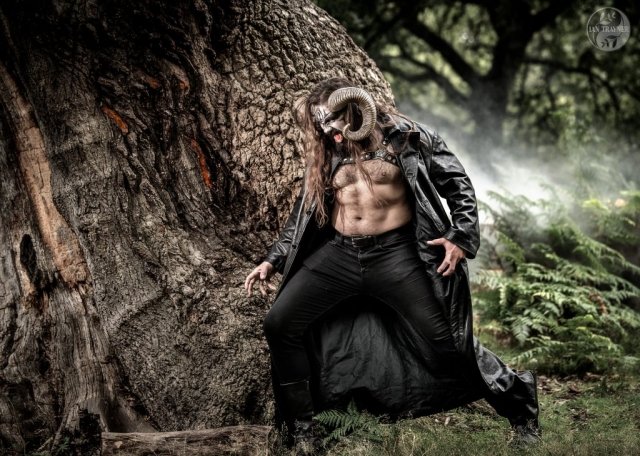 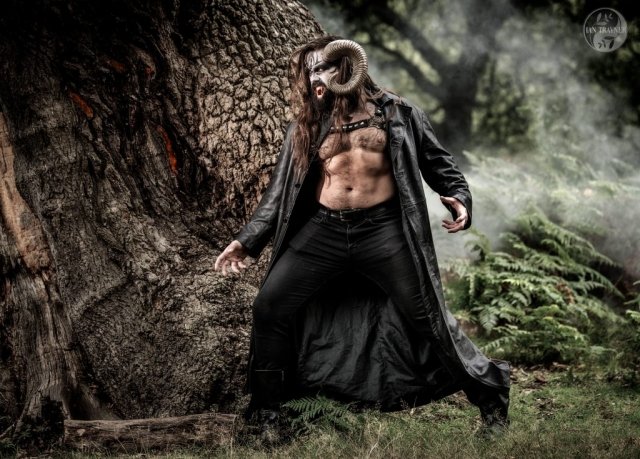 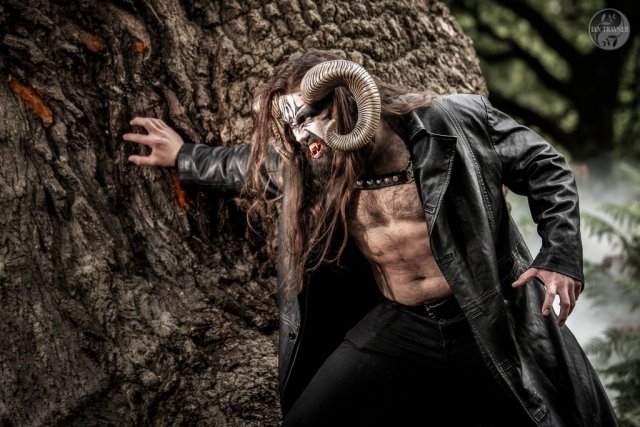 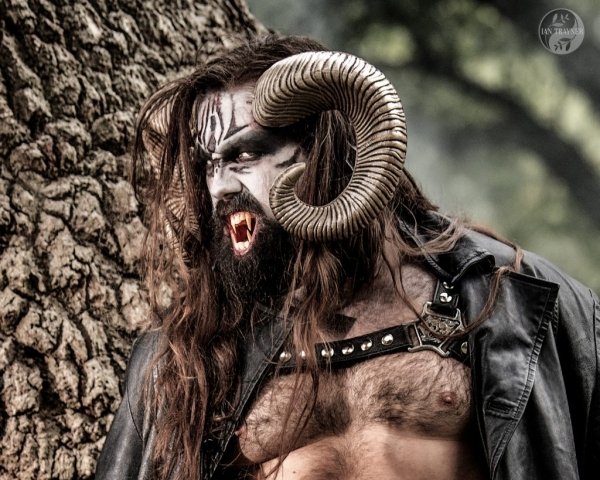 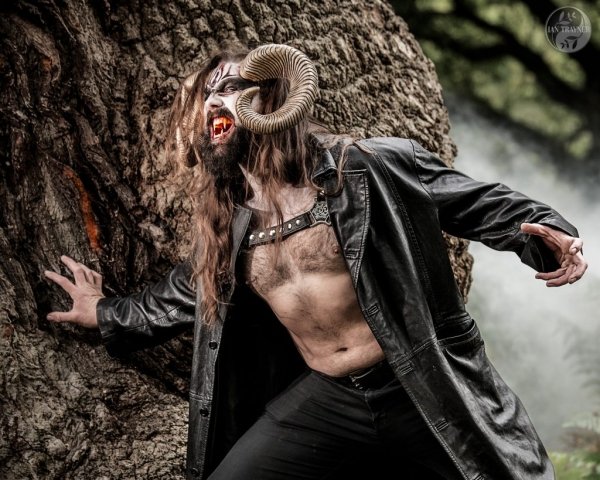 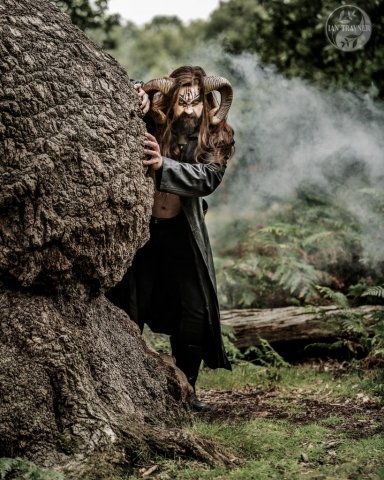 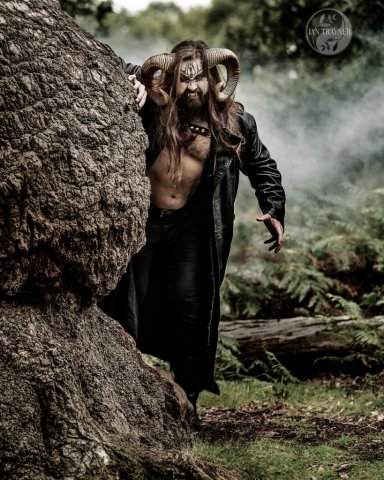 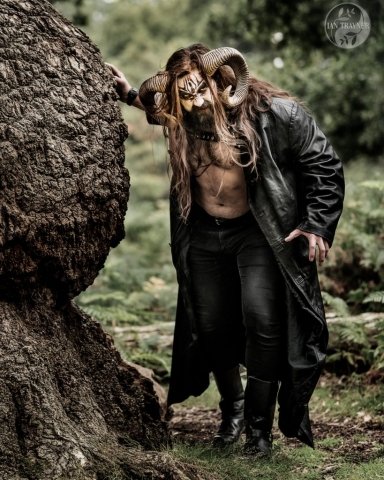 The horned beast was played by William Newton. Make up was by Debbie Hayward. The photo shoot was organised by Samantha Akasha Beck for PortraitX.

Although my story talks about a silent mirrorless camera, I was in fact using a Nikon D850 fitted with the AF-S NIKKOR 70-200mm f/2.8E FL ED VR lens. This is my “go to” equipment for most of my photo shoots but I couldn’t use it in my fantasy because the horned beast would have heard the shutter! This combination of camera and lens provides a huge tonal range, incredible sharpness, and pixels to spare.

Additional directional lighting was delivered by an off camera Nikon SB900 speedlight fitted with a Honl grid, and controlled wirelessly from a similar speedlight on my camera.

I wanted to create images that had a shallow depth of field. That is to say I wanted sharp subjects and blurred backgrounds. The Nikkor 70-200mm lens I was using will take very sharp imags at it’s maximum aperture of F2.8, and getting a correct exposure in daylight at this aperture requires fast shutter speeds. If you want to add some off-camera flash, which I did, this means using “high speed sync“. But this is very easy using the Nikon speedlights and utilising Nikon’s “advanced wireless lighting”. One simply has to set the camera and speedlights to do it, and they do it.

I must say it was somewhat luxurious using the speedlights, because I am used to lugging my much larger and heavier Ilux Summit 600 units around on location.

When every photo position is arranged, and the remote flash stays in the same relationship with the model for several shots, I prefer to set the flash manually (as opposed to TTL which measures light Through The Lens). That way I know all the images in one set will be exposed exactly the same as each other, and this makes it easier to edit multiple images. Although Nikon’s TTL is very impressive there can be small differences in exposure between shots. I have also acquired a personal preference for controlling my lights manually.

The appearance of dusk was created in post production using Photoshop (darkening and desaturating). However I took a bit of artistic licence because I did not want to sacrifice “style” for “realism” in this case. So I kept the bright areas fairly bright.

William’s orthodontics were also done in Photoshop. I used a mix of cloning, masking and liquifying to shape his teeth, and I creating highlights and shadows to make them appear more realistic. To tell the truth I did them quite fast, and didn’t get at all “perfectionist” about them – which is a weakness I tend to have sometimes.

“The Piper at the Gates of Dawn”

I suspect many people associate those words with Pink Floyd. But originally they come from a wonderful work of literature that was my favourite book as a child. Reading it now I am still touched by the quality of the writing, the sensitivity of the author, and the feelings that are evoked. The Piper at the Gates of Dawn is one of my favourite chapters in a book that most of you will have heard of, though probably for other reasons, and I will not name the book here. If you are a sensitive person who loves the British countryside, or the natural world in general, or even just childrens’ stories, I highly recommend visiting the link and reading the chapter.