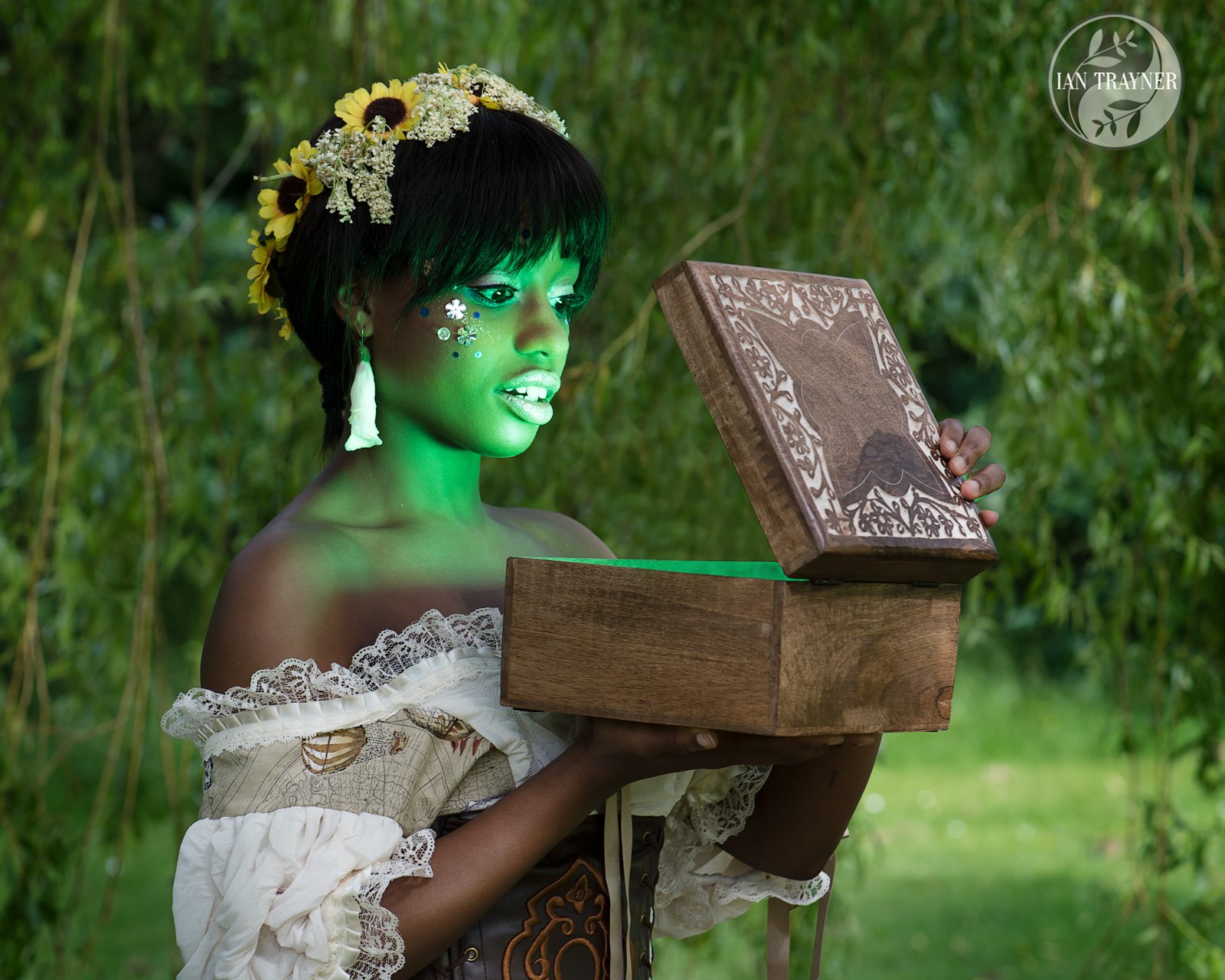 This was a fantasy photo shoot shot under the auspices of PortraitX. The aim was to shoot on location and capture the theme “Pandora’s Box”, with total freedom to re-interpret that story. So, with apologies to the ancient Greeks, this is my own personal version of the story of Pandora’s box.

Once upon a time, there was a very beautiful young princess named Pandora. She had an uncle who was a powerful magician. He was feared by the people and it was rumoured he had a box that contained devastation. But he loved Pandora, and she loved him.

It came to pass that Pandora’s uncle died, and one day Pandora found herself in his quarters, admiring all the curious and strange artefacts.

One in particular drew her eye; it was a beautiful small box. It fascinated Pandora, so she took it into the castle grounds.

“Surely this box can’t contain anything terrible”, she said to herself. “It is so small, and so beautiful!”

Filled with curiousity, she opened the lid… just a fraction. She peered in, and felt a strange floating sensation, and a feeling of intoxication. She was captivated by a mystical green light, compelling her to open the box fully.

Darkness jumped out and time itself became a chaotic blur… 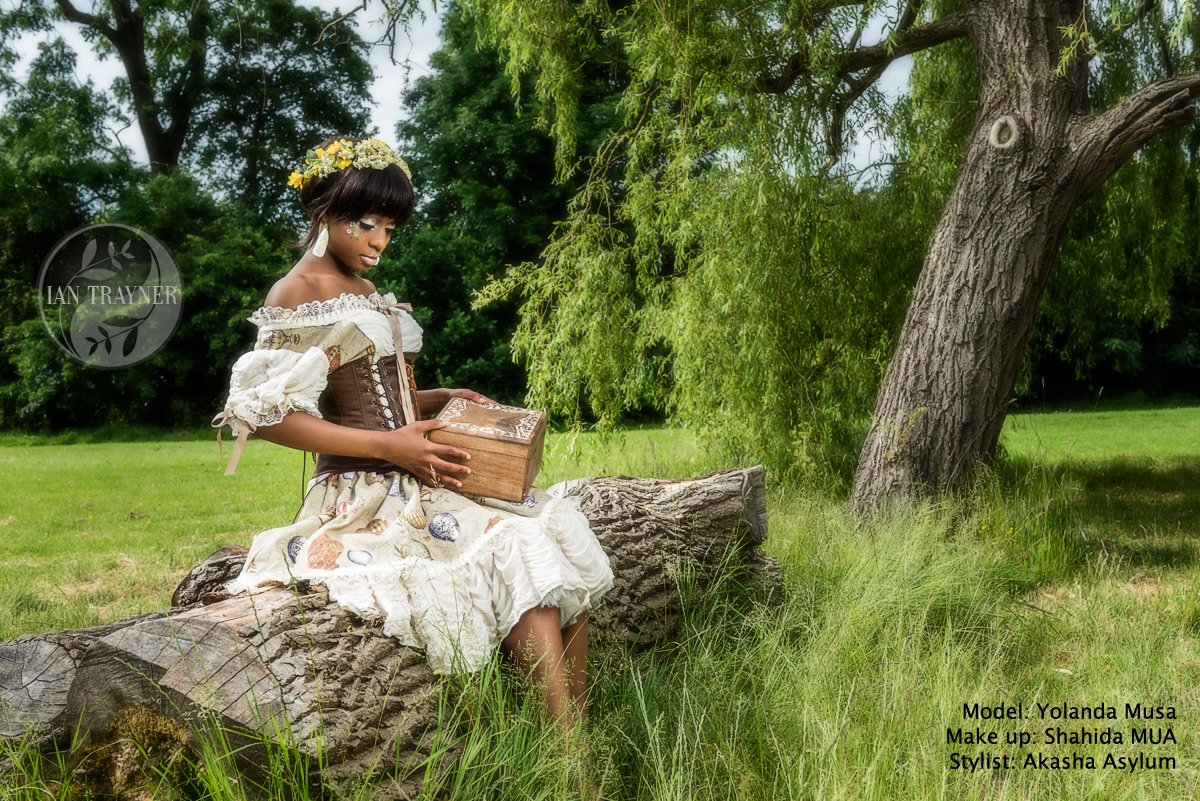 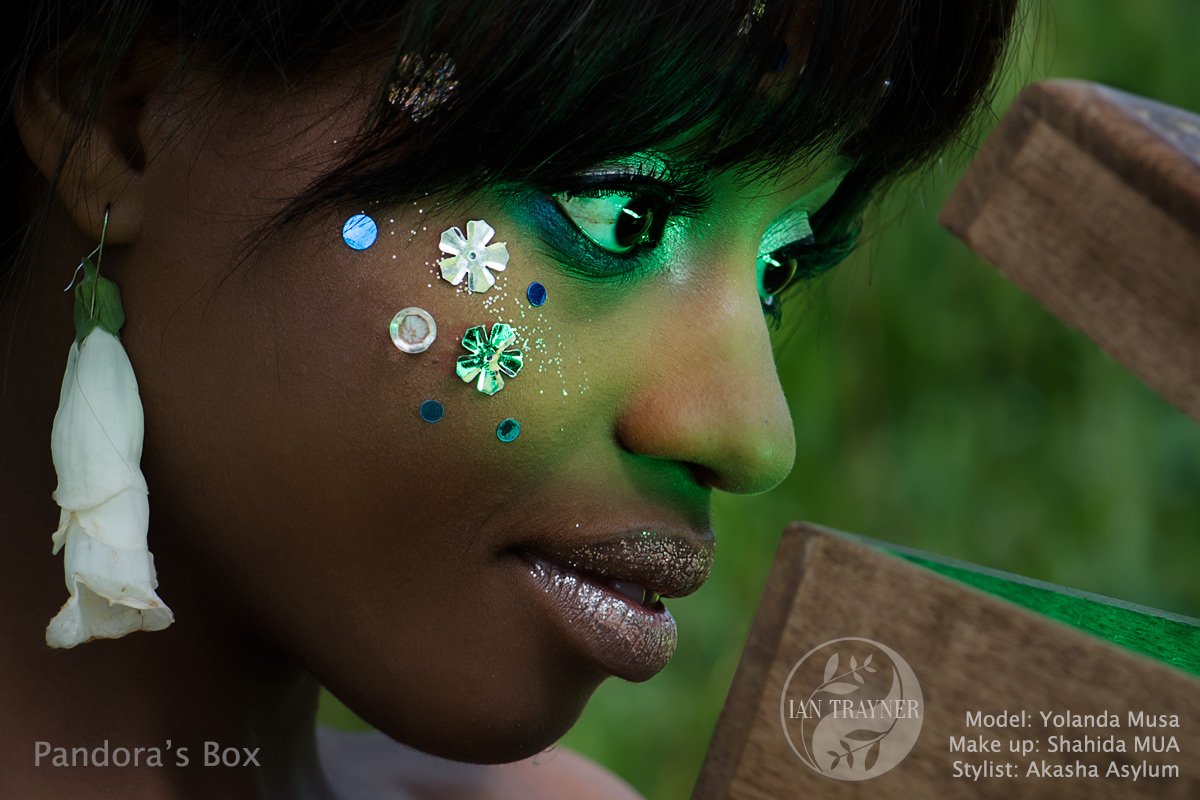 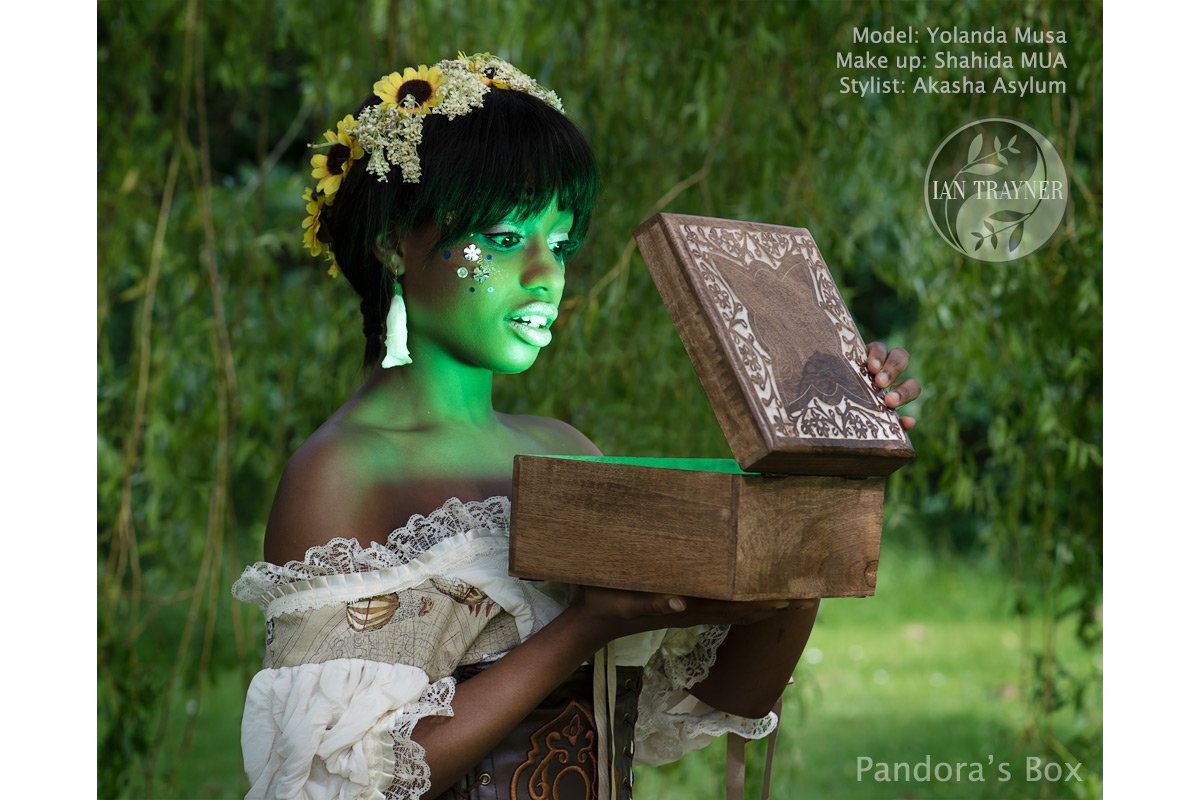 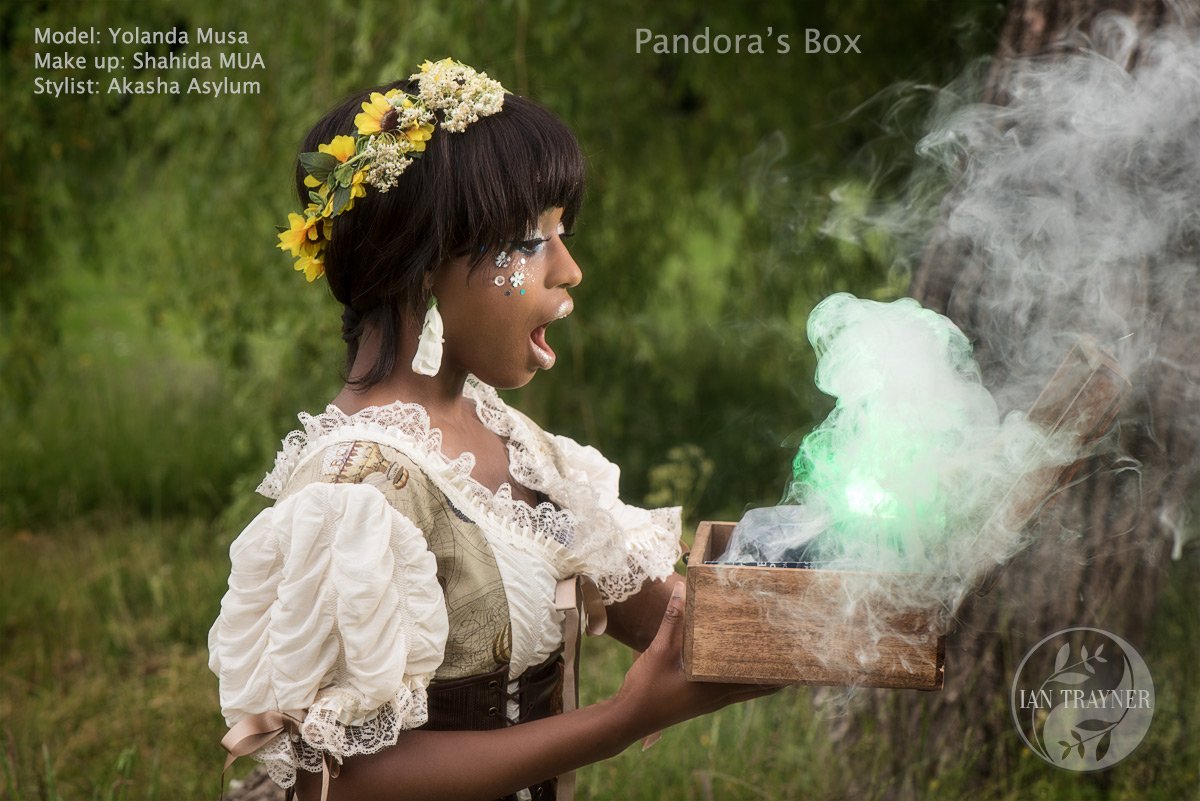 I used off camera flash with natural daylight. Shooting was a little tricky, because there was a bright sun and many small clouds, and the sun kept going behind the clouds.

When Yollanda was sitting on the tree trunk, the sun was behind her (at about 10’o’clock if the camera is at 6’o’clock) and she was illuminated from the right (her front) using a portable flash. This was a 600W battery powered head fitted with a soft box.

The green light shining out from the box was accomplished using two speedlights with green filters. I found that a single speedlight was not sufficient. I also took Yollanda as deep under the weeping willow tree as I could, so the ambient light was as low as possible. The important thing to know when you use coloured filters, is that the brighter the flash, the less it is coloured by the filter. (This is not intuitive until you think about it, then it makes perfect sense). So I used two speedlights, both set at minimum power output, triggered wirelessly using a radio transmitter.

As always when using flash, you are effectively superimposing two exposures in one image; one is the image that is recorded by the ambient light, and the other is the image recorded from the flash. One image. Two superimposed exposures to give a final net exposure. The flash exposure is dictated by the power from the flash and the aperture. The ambient exposure is dictated by the aperture and the shutter speed (both are also affected by the ISO obviously).

In the story, when the character “Darkness”  jumps out of the box, I wanted a long exposure in order to show movement, but I also wanted the scene to appear darker overall. The camera was mounted on a tripod to keep it still, and the flash was set to “rear sync”. That means the flash fired at the end of the exposure, not at the beginning. We had to practice quite a bit to get it right, and technically it was quite challenging.

Firstly I had to find an exposure that was long enough to fit in all the action. The image here was exposed for 1.3 seconds! That gives Marcus (who played “Darkness”) enough time to be recorded at his starting position, and then move to his final position before the flash fires. In between he appears as a blur.

But it was a very bright day, so how was I going to avoid overexposing the image? The answer was to use an aperture of F22 plus a 3 stop ND (neutral density) filter. A 3 stop filter reduces the amount of light getting through by 3 stops, that is to say it blocks 7/8 of the light getting through.

So far so good. But could I get the flash bright enough to capture an image at F22 with a 3 stop filter? That is to say, the amount of light has to be sufficient for whatever is 3 stops brighter than F22! I just managed to get away with it, using two 600W flash heads, both fitted with small reflector dishes, and both as close to Marcus’s final position as I could get them. They are just out of shot to the right.

Poor old Marcus, not only did he have to do his leaping and grimacing until we got it right, he also had to look in the direction of 1200W of light flashing in his eyes! But he did an amazing job.

I also like the effect that a 1.3 second exposure has on the smoke, and it was this that suggested that time itself became blurred and chaotic with Darkness jumps out of the box, as stated in the storyline.

“Out of a Story Book” Photo Shoot