What a surprise! I never expected this. The second time in my life I saw a sparrow hawk it was in my own back garden, in Kingston upon Thames, Surrey.

I was sitting by the back windows in my studio, having tea and reading something. Suddenly out of the corner of my eye I saw a bird of prey. It was just a fleeting glimpse. But I saw enough of the pattern of it’s wing to know a bird of prey had landed on the studio roof! I know there are kestrels in Richmond Park, which is only about half a mile away. But even in that fleeting moment it looked like the wing of a hawk, not a falcon. So what could it possibly be?

What to do? What is the chance it will stay long enough for me to take a photo? But “nothing ventured nothing gained”. So I rushed upstairs, fetched the key to where I keep my cameras, grabbed a camera, and to my delight the bird was still there.

Now birds of prey are famed for their excellent eyesight and I didn’t want to spook it. So from the landing I took a photo through the back room.

Fortunately for me this camera has lots of pixels, so I was able to crop the image savagely and still end up with a lovely photo of the sparrow hawk. The camera is a Nikon D850 and the lens used is the AF-S Nikkor 70-200mm 1:2.8E FL ED (don’t ask me what all those letters mean).

I don’t know about you but to my eyes this bird is incredibly beautiful.

Getting a positive ID on the sparrow hawk

Even when I looked at the photos I was not totally sure it was a sparrow hawk. It was definitely a hawk (not a falcon) and the only bird that seemed to fit the bill (I don’t mean beak) was “sparrow hawk”. So I looked online, and “sparrow hawk” looked ever more likely. No other bird of prey seemed possible, but I couldn’t find any pictures of a bird that was identical. So I sent my photo to some real experts at Phoenix Rescue.

Are sparrow hawks rare in Kingston upon Thames?

I don’t honestly know if sparrow hawks are rare in Surrey, but as far as I am concerned, this was definitely a “rare sighting”.

The power of networking

I first came across Phoenix Rescue on a photo shoot of all places! Since then I have followed Phoenix Rescue on their facebook page. They do very important work rescuing and releasing birds of prey. They regularly post videos of rescued raptors being released back into the wild. This is a very worthy charity.

Phoenix Rescue confirmed my bird is indeed a sparrow hawk. Furthermore they told me it is an immature female sparrow hawk.

I feel very lucky and priviliged to have seen it, let alone photographed it in my back garden, on the roof of my photo studio.

The photos below were taken on a fantasy photoshoot organised by PortraitX. The owl and kestrel were brought to the shoot by Phoenix Rescue. 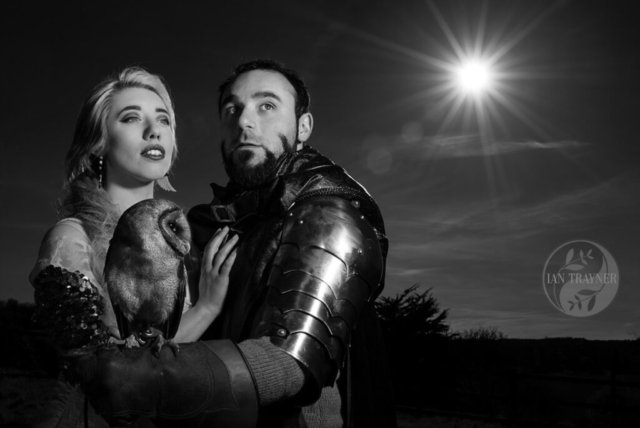