Every Autumn Richmond Park attracts an influx of photographers who want an opportunity to photograph the red deer in rut. It is easy to understand why. The deer are not really afraid of people so photographers can approach them, to within the reach of a long lens.

Although the red deer in Richmond Park do allow people to approach them there is always an element of risk. These deer are large and powerful animals, and they can cover large distances very quickly. In the rutting season the stags can be dangerous, and while they do not naturally target humans, they do sometimes attack people who approach too closely.

So it is best to be cautious and keep a safe distance away. The park authorities recommend keeping at least 50m away. But that 50m can quickly disappear when your back is turned!

I recommend that if you want to photograph the red deer in the rutting season, you should always be very aware of your surroundings. These deer can cover ground very quickly are are free to roam in the park wherever they wish.

I am not an expert on red deer. But what immediately becomes obvious if you spend any time watching them in Richmond Park is that they have a complex social structure. And when you bear in mind that individual deer have lived among the other deer here all their lives, it stands to reason that they all know each other as individuals.

If you want to quickly find out a bit more about red deer this is a good link.

I do not want to anthropomorphise, but many times I have seen what give the impression of real affection between the deer. I have seen it between females and stags, and between individual adult females too. I have previously noted that the relationship of stags with their “harems” seems to be far more subtle than many programs on the telly would suggest.

These photographs were taken on 27 September 2019. It may be relevant that the rut is still in it’s early days. The stags aren’t going at things “hammer and tongs” yet.

This story starts with a stag and his “harem”.  Here he is doing some bellowing…

and licking the air…
What follows is my interpretation, which should be taken with some caution. The stag reacts to some other stags who have been strutting and bellowing (off stage camera left) for some time and he has been provoked into sorting them out. So he leaves his females and walks towards the other stags who are approximately 150 meters away.

On the way he pauses to pound his antlers in the ground and do some urine spraying. Isn’t it good that men don’t behave like this?

He continues on his way…

I notice that his route seems to be heading directly towards this (photo below) although it is difficult to tell because of the distance between us.

Now what was I saying about the need to be very aware of your environment? But I don’t believe this photographer was in any real danger. The stag has only one thing on his mind, and that is the other stags whose behaviour has been provoking him.

I am not the only interested onlooker. Note the presence of flies around the head. These are pretty well constantly buzzing around the deers’ heads;
This (below) is my final photo of the first stag. He then goes off to strut up and down with the other stags who attracted his attention in the first place.

But meanwhile… look who is approaching all the females that he left behind!

This dude has a serious set of antlers, and he “takes up residency” with the females the other stag just left behind. So “whose” females are they? I suspect he is a very eligible stag because very soon a whole new gaggle of additional females come sauntering over to join him! I can hear them giggling from here.

One thing I have noticed over the years is that the females are not “owned” by any of the stags. They appear to have a lot of freedom to come and go as they please. This surprised me at first because it contrasts with an impression I got from watching wild life documentaries on the telly.

I do not know what the next two photos mean. She looks so tiny compared to him. Has there been some kind of misunderstanding?

Now he is doing his wolf impression. Very good too. 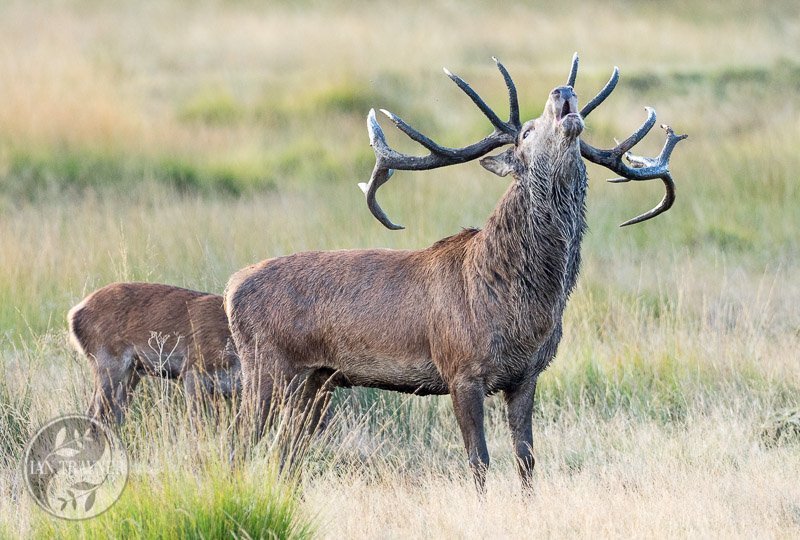 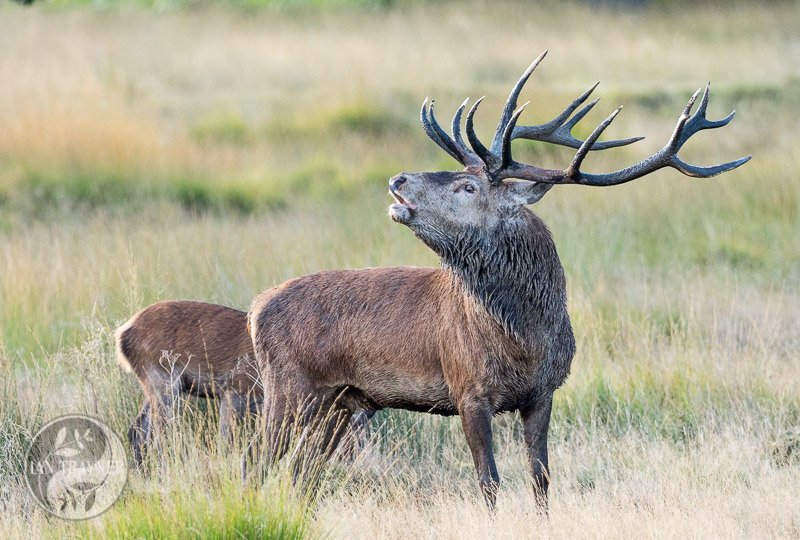 The disadvantage is that in my opinion the highest ISO at which the EM-1 MkII can take professional quality photos is 800. This opinion is shared by several other Olympus users I have spoken to, but perhaps not everyone.

Most of the above photos were taken at ISO 800.