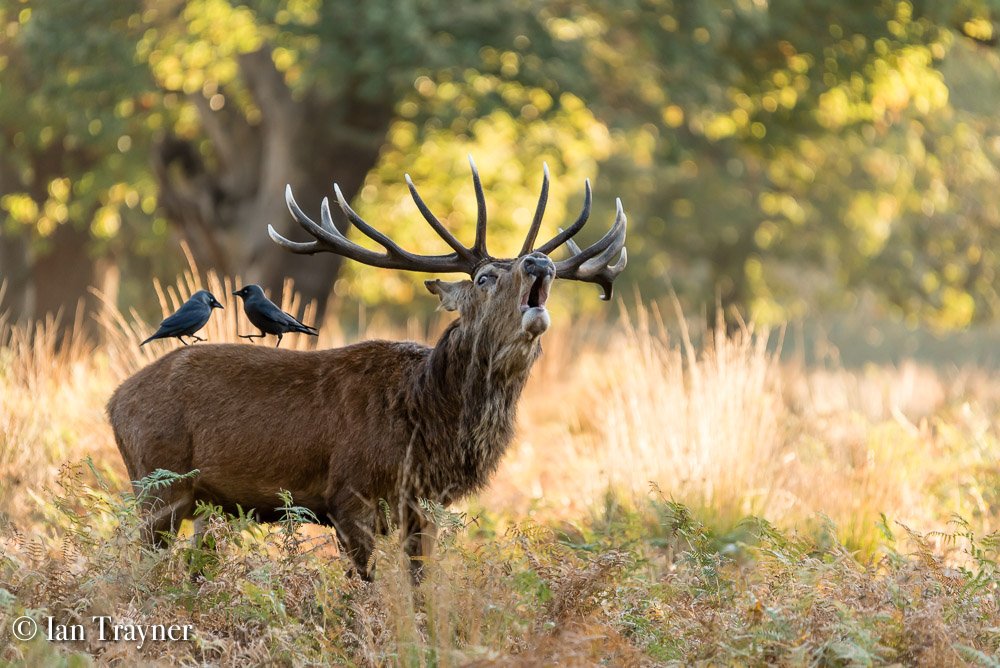 A story of animal instincts

This is the season of the red deer rut, and Richmond Park echoes to the sound of stags bellowing, and the clash of antler against antler. I have become fascinated by the behaviour of the deer, which appears to be much more complex and subtle than the natural history programs on the telly would make it seem.

I am not a wildlife photographer, so my photographs of the red deer in Richmond Park are just taken as a hobby. Nevertheless, those of you who are familiar with my fashion photography will know I like to “tell a story” with my photographs. In this blog post I present a series of photographs that tell a true story from real life.

The morning I took these photos, I came across “Stag A” on my way into the park. He had about 6 does with him, and I took several photos, mainly of the stag, because he was so strikingly handsome! 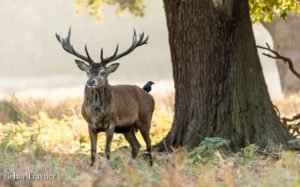 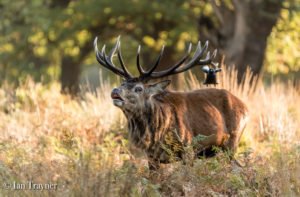 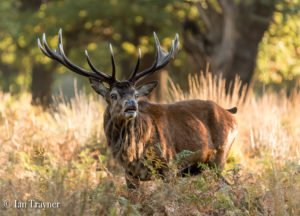 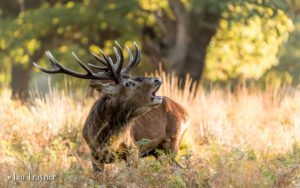 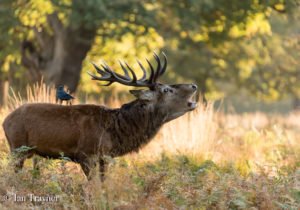 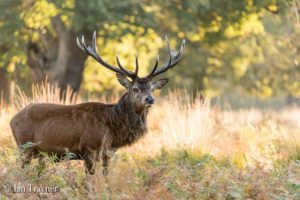 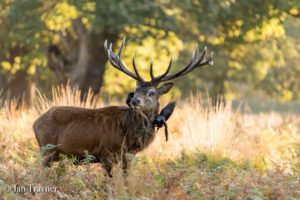 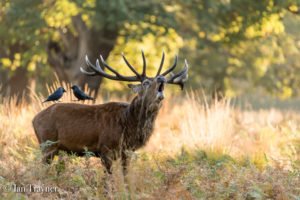 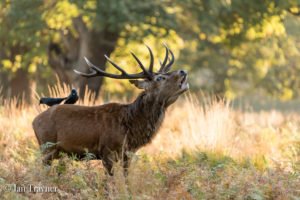 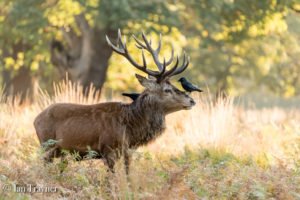 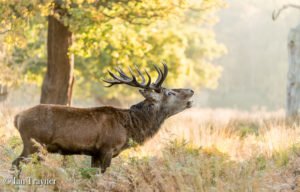 I love the way the deer appear to be oblivious to the “cheeky” jackdaws that land on them, even on their faces! Sometimes the birds tug at the deers’ hair quite powerfully. I am not sure why they do that at this time of year, because this is not nest building season, so they can’t be after the hair for nesting.

After a while I walked on and had other encounters in the park. But later, as I am walking back towards home to get my breakfast, I pass Stag A with his does once more. A few yards further on, I find myself approaching “Stag B” who has three females with him. He is about 200 yards from Stag A, and as I approach, Stag B starts grunting and bellowing. I don’t know if my approach triggered his vocalisations, but I do get the impression that sometimes the approach of people will start them off on their displays.

Here is Stag B with “his” three does, on my path; 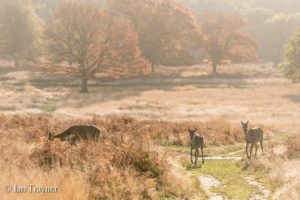 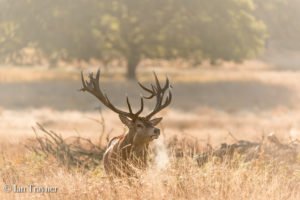 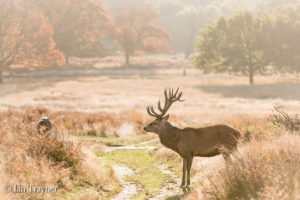 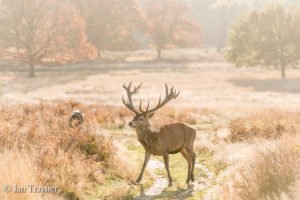 When Stag B starts his grunting and bellowing, it attracts the attention of Stag A, who is now behind me. In fact I am standing more or less in the middle between them.

So now Stag A starts bellowing from somewhere behind me, and these photos shows Stag B looking towards Stag A… 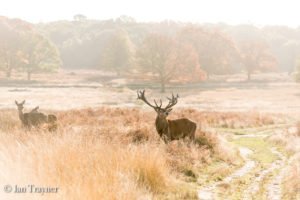 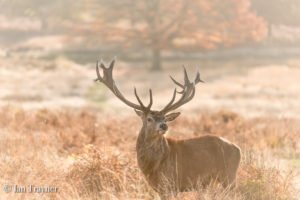 In fact Stag A is already on his way! He is not quite running, but he is moving swiftly, and in a very purposeful manner directly towards Stag B… 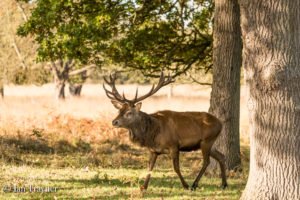 Stag A passes close to me… 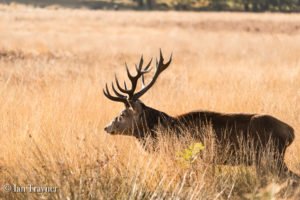 Stag B watches as Stag A approaches… 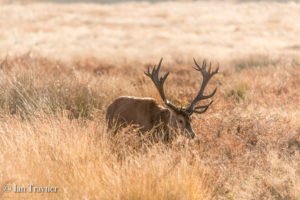 Then Stag B turns away and seems to be retreating. Or maybe not? The two stags face each other and walk side by side for a short while. Are they sizing each other up? Surely both stags must know each other quite well already, being neighbours? 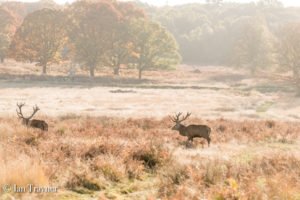 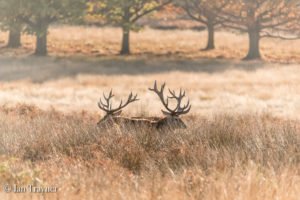 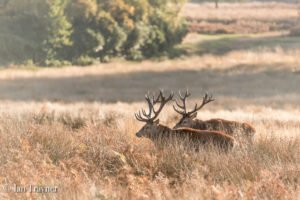 Then they go at it. I did not take any photographs of the fight because I could only see the very tops of their backs. When stags fight, they get their heads right down to the ground, and the fighting stags were almost completely hidden behind tall grass and a slight hillock. But as soon as they started fighting, the three does that were with Stag B, move fast and “purposefully” directly to join the does that were already with Stag A.

This was the most surprising part of it all to me; the way these does seemed to know exactly where to go, and the fact they went there without any hesitation. Here is a photo showing them moving at some speed. Note how their ears are pinned back as they listen to clash of antler against antler, as the two stags fight each other behind them. 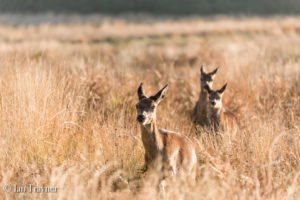 After a brief struggle, which couldn’t have lasted for more than 20 seconds or so, Stag A is victorious. He seems a bit “worked up” and does some more “triumphant bellowing” (Stag A is the one on the left)… 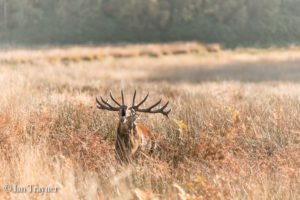 Then he follows the three does, moving fast and with apparent “purpose”, he passes close by me. He looks to me like he “has something on his mind”. He passed very close to me, as you can see… 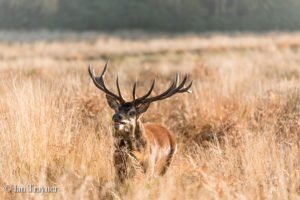 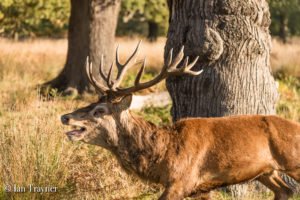 To the victor, the spoils

The next bit I did not manage to photograph unfortunately because I was not looking in the right direction at the right time. But a few moment later when I looked back at Stag A, he was just getting off one of his “new does” whom he had just mounted. 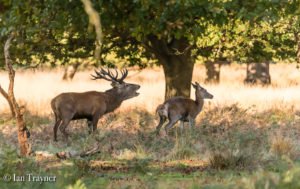 So there you have it; a tale of “animal intincts”, full of passion and excitement!