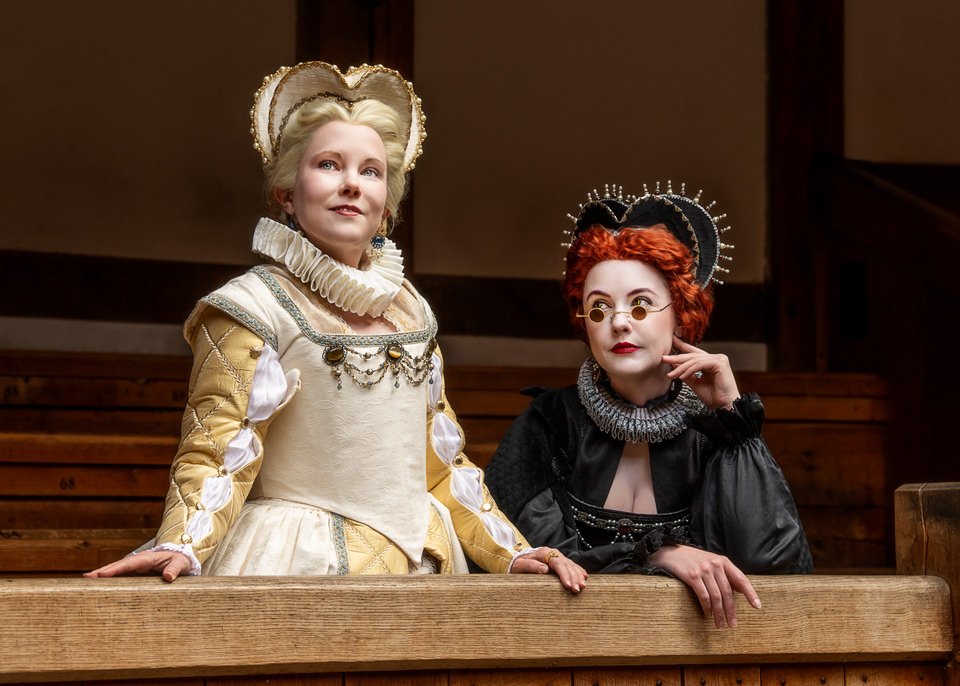 I was commissioned to do a cosplay photoshoot in Shakespeare’s Globe theatre. The photoshoot was inpired by “Good Omens”.

What is “Good Omens”?

“Good Omens” is a six part “fantasy comedy” television series written by Neil Gaiman. It is based on a novel he co-authored with Terry Pratchett called Good Omens: The Nice and Accurate Propheciesof Agnes Nutter, Witch.

For anyone who is not familiar with the story, it is typical Pretchet fun and nonsense. Briefly… it is complicated.

The main characters in the TV series are Aziraphale played by Michael Sheen, and Crowley played by David Tennant. Both the characters are hugely charismatic. Aziraphale is an angel, and Crowley is a demon. And it becomes gradually more and more clear that between Aziraphale and Crowley there is a kind of love that “dare not speak it’s name”. And together they sort of “conspire” to prevent Armaggedon, thus putting a spoke in the wheels of God’s great plan. As I said, this is typical and highly enjoyable Terry Pratchett (and Neil Gaiman) nonsense. I can thoroughly recommend it, and tasters can be found on Youtube of course.

When I was fact checking this post I discovered the quotation “a love that dare not speak it’s name” did not come directly from Oscar Wilde, although it is associated with him. And it may not have originally meant what we think it means? But be that as it may, Crowley and Aziraphale (in particular) are very circumspect when it comes to demonstrating their affection for each other.

Female versions of Aziraphale and Crowley

My clients are a married couple Crystina and Amara (links with their permission). Together they run an online business selling wigs. They are very creative and keen on fantasy and cosplay and imaginative things. They wished to represent female versions of Aziraphale and Crowley, and they hired me to take photos of them wearing the costumes they designed themselves, in Shakespeare’s Globe Theatre.

I confess I didn’t realise the significance of using Shakespeare’s Globe as the location when we did the shoot. Nor did I realise the significance of the grapes. But I discovered later that one of the scenes in Good Omens is set in The Globe, and in it Aziraphale is eating grapes. If you aren’t familiar with the series this video clip shows the scene in question, and it will give you a taste of the humour and irreverence involved. 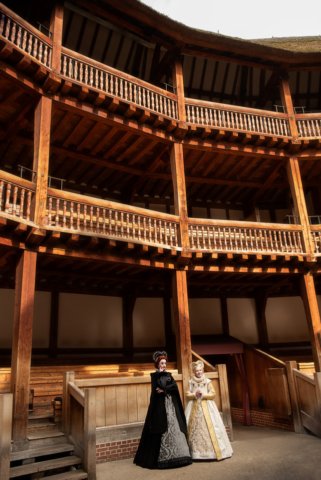 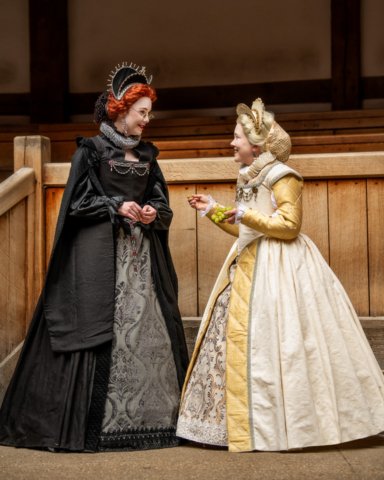 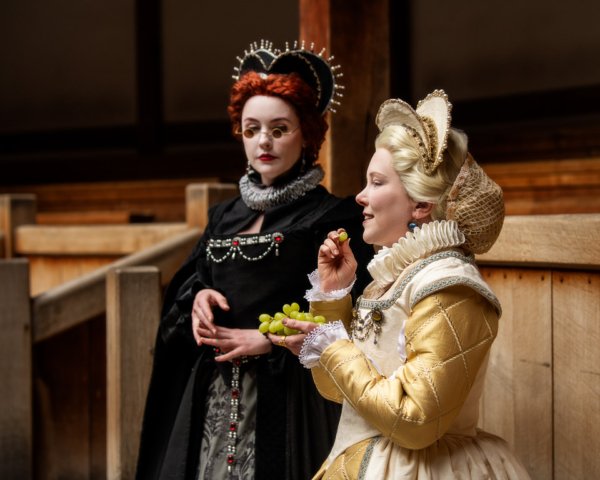 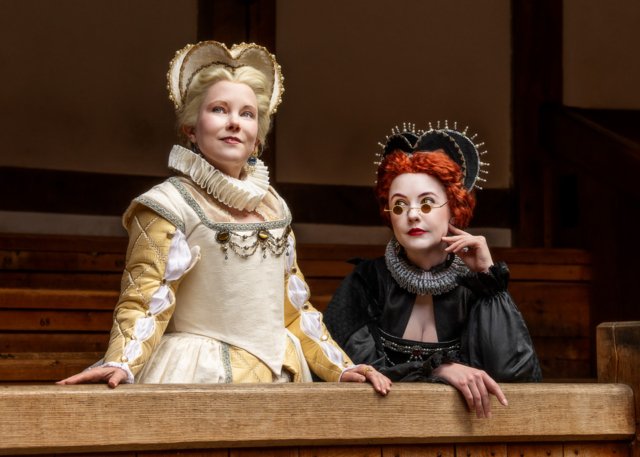 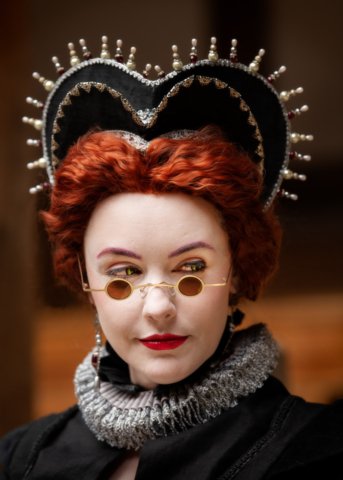 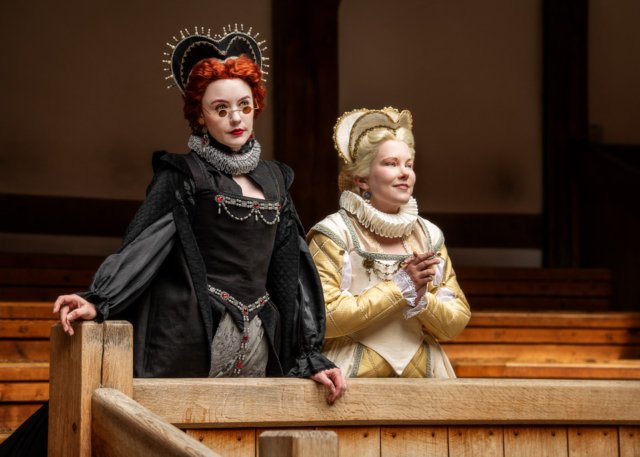 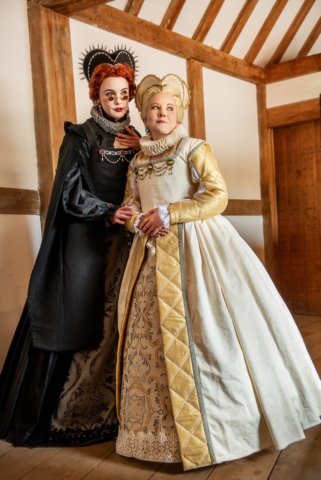 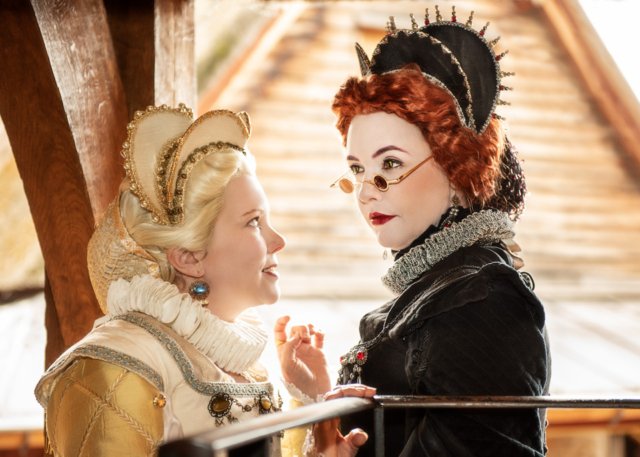 Exquisite costumes and attention to detail

Crystina and Amara designed their own costumes, and the quality and attention to detail are very impressive. I think you will get a feel for this from the photos and they certainly caused a stir among the staff at The Globe, and members of the public also.

When we went into the pit to take photos some actors were rehearsing “Julius Caesar”. Quite rightly I was asked not to photograph the stage or any members of the cast. However shortly after we arrived the actors had a break, and I felt much less inhibited knowing we were not distracting them from their work. Aziraphale and Crowley were a wee bit distracting. Julius Caesar (Dickon Tyrrell) even came and had a chat with them. I noticed I felt flattered even though my glory was just by association.

When the actors came back from their break we left the pit and went up to a higher level for some more photos.

We had limited time, and lighting stands and a tripod were out of the question because of the venue. Therefore nearly all of the photos were taken using only natural light. The camera was set to aperture priority and allowed to do it’s own thing. I find it very freeing when I am able to work in this way. That is to say not having to lug lights around, not having to measure how much light there is, and being able to alter my aperture without a second thought according to the depth of field I wanted.

I did use a speedlight mounted on the camera to add a little fill light for some shots taken upstairs. This is because there was very bright daylight behind the stars, and I needed to add a little light from the camera side. For these shots everything was set to manual (camera body and speedlight both).

I used Photoshop to remove anachronisms like floodlights, exit signs and fire extinguishers. 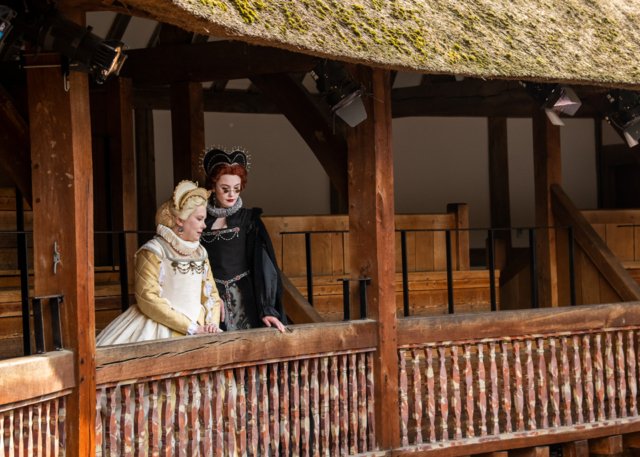 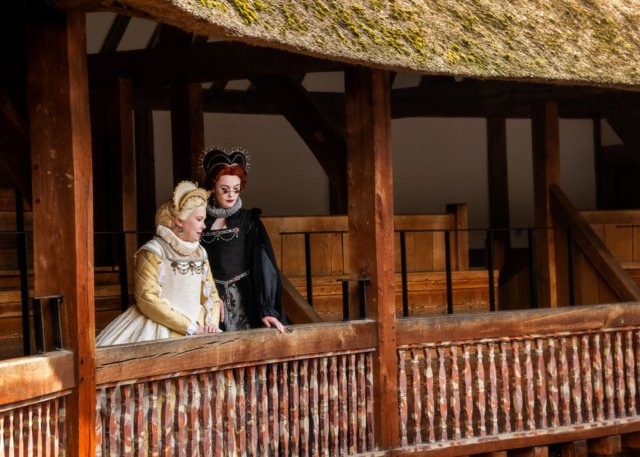 The theatre staff were very interested in Crystina and Amara. They asked questions about their costumes, and the inspiration behind the photoshoot. When we eventually left the theatre through the foyer the theatre staff sponaneously clapped the ladies out. Once again I found myself feeling a bit grand just by being with them.

It was a huge privilige doing this photoshoot and I am very grateful to Crystina and Amara for trusing me to be their photographer. I am also extremely grateful to the staff of Shakespeare’s Globe for their support and friendliness, and also for giving us permission to take photos at this unique location.