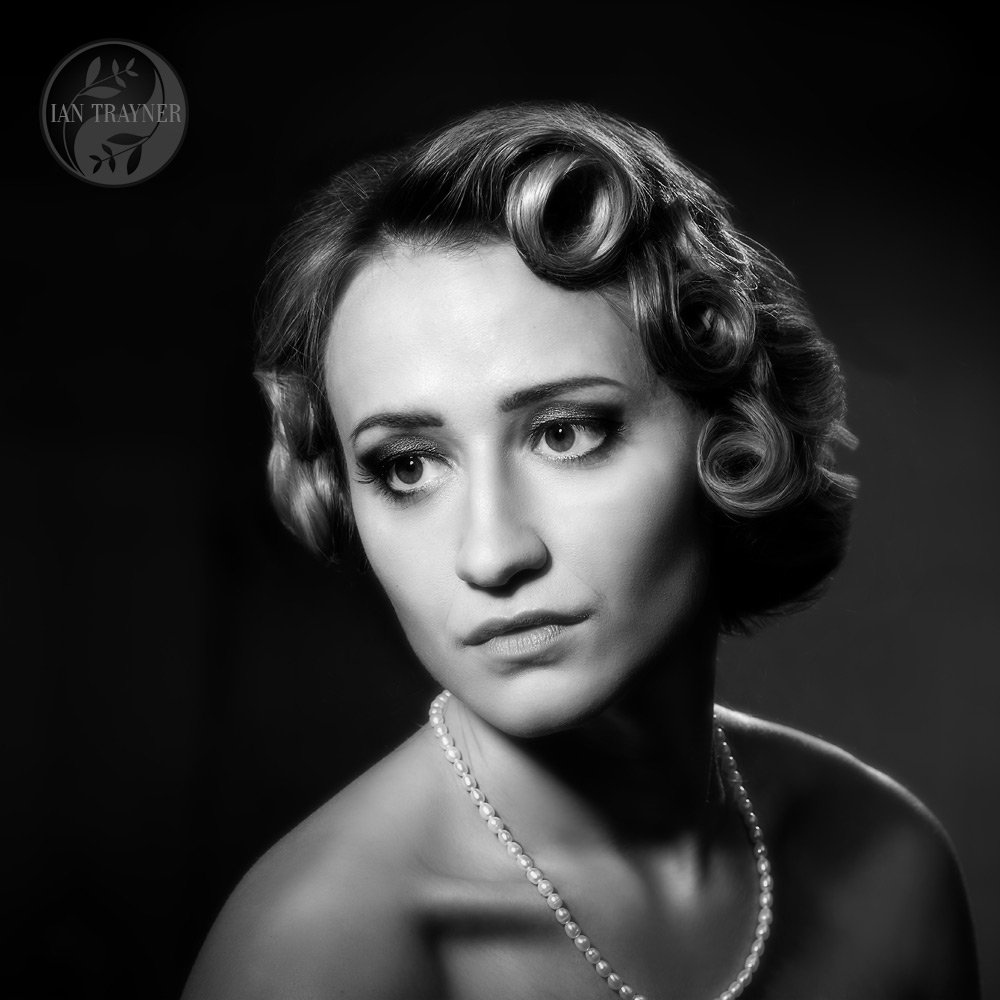 What is Hollywood Lighting?

“Hollywood lighting” is an expression photographers use to describe the cinematic style of lighting that was used in the “good old days” of classic black and white films, and “film noir”.

I think it comes down to controlling light and shadow – both being equally important. The lighting is very stylish, and tends towards a steep tonal curve (ie deep blacks and bright whites).

It is my personal view that any photographer who cares about the quality of his or her work should constantly be on the lookout for inspiration. It is not a question of “copying”, but trying to emulate a style that you have seen. There is a lot to be learnt by looking at the work of others.

But because still photographers capture still images, so we have a luxury of choice. We can opt for continuous lighting or flash. Both have their advantages and disadvantages, and there is a large choice of technologies available.

Some photographers who want to specialise in “Hollywood lighting” invest heavily in specialist lighting. But most phtoographers who wants to emulate this style will probably want to use equipment they already own.

I am going to describe a method whereby a photographer who uses studio flash can emulate Hollywood lighting very simply. The trick is to use reflective dishes fitted with grids. Incidentally, this is one of the very first things I learned from Damian McGillicuddy, to whom I owe a debt of gratitude. I have learnt a great deal over the years from this thoroughly decent chap.

In the classic days of black and white Hollywood films, fresnel lenses (pronounced fray-nel) were often used to control the spread of light. Fresnel lenses act by collimating light produced by a bulb. Let me explain that; light spreads out in all directions from a bulb, but if the emitted light goes through a lens that makes the light rays travel parallel to each other, that is collimated light.

A grid performs a very similar effect. It doesn’t achieve it by changing the direction of the light, but by restricting the amount it can spread out. It does this by forcing the light through small tubes – the grid. Grids vary – some restrict the spread of light much more than others.

The models in these photos were lit using a 21cm Elinchrom refector dish fitted with a grid. If you aren’t a professional photographer and you follow that link, you will probably be surprised by how much these things cost; “that much for just that?” But grids are not that easy to manufacture. Still, the cost is a small fraction of what you have to pay for proper fresnel ligthing systems.

It wasn’t just film studios that used “Hollywood lighting”. Many portrait photographers have used, and even specialised, in this style of lighting. A quick Google search will pull out many examples.

That is so cool! I just did a Google search to verify my last sentence, and was delighted to see six of my own images appear in the search results. Result!

Because Hollywood lighting is collimated – at least to a degree – it is very “hard”. That means it creates relatively hard edges to shadows. This lighting flatter thin faces, but can be very unflattering to people who have round faces.

Furthermore, because Hollywood lighting is conducive to area of strong shadow, it can help an experienced photographer flatter certain types of subjects.

Consider the image of Yulia Volosnikova (above). I have deliberately shot her as a “Hollywood star”. Let us briefly look at the important points;

1. I have used a main key light on her face to flatter. The position of the light source relative to the model is critical. Notice the strong catch lights in Yulia’s eyes, and consider how they contribute to the image. The main key light was an Ilux Summit 600 fitted with an Elinchrom 21cm dish plus grid.

2. There is a rim light coming from behind Yulia, to the right as we look at her. This defines her left should, and also her right cheek, neck and throat. The position of this light also is critical. (By “critical” I do not mean there is only one exactly correct position, but rather that small changes in position cause major changes in the effect the light has on the model). this light was provided by a speedlight.

3. While I was shooting this series of images, in this location, I also had a fill light pointing at the model, behind the photographer’s right shoulder. This light was turned off for this particular image. The intensity of the fill light can be adjusted to change the darkness of the shadows.

4. One of the nice things about modern digital cameras is you can inspect the photographs you have just taken on the back of your camera. Looking at Yulia’s images, I decided I need to shine more light on her hair, from both sides. I acheived this using two more speedlights, one on each side of Yulia’s head. It was important that the light from these did not spread out and ruin the shadows elsewhere on Yulia. I found I could achieve this simply by using the speedlights withour any lighting modifiers.

In summary; the above photo of Yulia was captured using FOUR lights;
(a) main key light
(b) rim light
(c and d) two speedlights on either side of her head.

I am grateful to Empress Design and Print for the location, and PortraitX for organising the shoot.

One to one photo tutoring

Are you a budding photographer who would like to get some personal one to one tuition on a PortraitX photo shoot? If you are then contact me.

Behind the scenes (BTS) video

Video captured and edited by Matt Tress of Shinzou Media

The Magic of Light – part 2